Legend of the Elements is a tabletop roleplaying game.

This means that it is a game played by a small group of interested people where everyone sits down for a few hours and pretend to be characters in a fictional world, using the rules in this book to aid in telling a certain type of story. No experience with roleplaying games is necessary to play this game, though at least one person in the group must read the whole book. Tabletop roleplaying games leave a lot of the specifics up to the imaginations of the players, instead providing structure to guide the creation of those specifics.

Legend of the Elements is a standalone hack of Apocalypse World.

Apocalypse World is another tabletop roleplaying game that was written by D. Vincent Baker. If you are already familiar with that game, much of this game’s structure will be familiar. If not, don’t worry, this book contains all the information you need to play the game. The hallmarks of the system are a lot of self-contained sheets that make starting play easy, a main resolution system that creates an inseparable link between fiction and mechanics, and set of clear instructions for how the facilitator runs the game (rather than the vague guidelines and advice of many systems).

The rules of this game will help you to play a game specifically within that genre of fiction, which is characterized by a world where the supernatural is, if not common, at least heard of and where both martial arts skill and control of the supernatural are normal for heroes. This genre, known as wuxia, is associated with Chinese literature, but the setting of Legend of the Elements is not a real world place. The assumed setting for the game is a fictional world with a pan-Asian culture, but there is no reason this must be the case at your table. The largest inspirations for this game are the Nickelodeon cartoons Avatar: The Last Airbender and The Legend of Korra. This game is not associated with those shows, but they are an excellent guideline for tone, style, and pacing in Legend of the Elements. In addition to Avatar, Legend of the Elements draws on other cartoons and shows both from the west (like Samurai Jack) and the east (like Fullmetal Alchemist). Other inspirations include the Codex Alera novel series by Jim Butcher, wuxia films and literature, anime, and the Four Great Classical Novels of Chinese literature.

Find additional support for this game at legendoftheelements.com!

If you are interested in a softcover copy of this book, a print on demand copy can be ordered for $25 on DriveThruRPG!

In order to download this story game you must purchase it at or above the minimum price of $10 USD. You will get access to the following files: 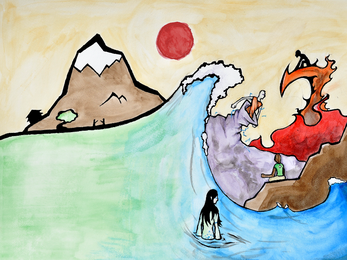